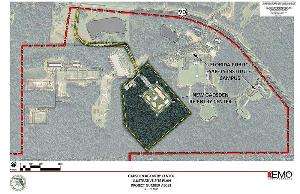 From the Tallahassee Democrat:

Work has begun on the Gadsden Re-Entry Center, a $19-million, 76,000-square-foot minimum security prison on the grounds of TCC's Florida Public Safety Institute in Midway.

The prison, the first collaboration of its kind between the state Department of Corrections and a college, is on target to open in October 2012. It will house about 400 men who are close to leaving the prison system, many of them returning to Gadsden, Leon and surrounding counties.

The Gadsden Re-Entry Center is projected to create between 150 and 200 new jobs in a county that has one of the highest unemployment rates in North Florida.

It also will serve as on-site training for the cadets at the Florida Public Safety Institute, formerly known as the Pat Thomas Law Enforcement Academy, while indoctrinating them in the culture of "re-entry," a growing focus of the corrections world in Florida and nationwide.

"The real No. 1 priority is that over time this facility will bring as many as 250 jobs to Gadsden County. That's something the college has been committed to for a long time -- improving the economic climate in Gadsden County," said TCC President Jim Murdaugh, who was in charge of the Florida Public Safety Institute when TCC and DOC came to terms on the Midway project in 2009.