The Corrections Foundation's Board of Directors is appointed by the Secretary of the Florida Department of Corrections. In addition, the Secretary appoints the Board President, with the Vice President and Treasurer elected from the other board members.

The board is an all-volunteer board and receives no compensation for its service.

President of the Corrections Foundation

Mark Redd began his career with the Florida Department of Corrections as a Correctional Officer in 1978 and retired in June 2011. During his tenure with FDOC, he served in every Correctional Officer class position as well as Assistant Warden, Warden, Regional Director, and Assistant Secretary of Institutions. In September of 1999, then Captain Redd was presented with the Secretary's Unit Citation Award (Now known as the Medal of Honor) for service above and beyond the call of duty.

Since his retirement, Mr. Redd has become involved in the private business world and serves on the Board of Directors for another charitable organization. Most of his time though is spent enjoying his family, especially his grandchildren. He was appointed to the Corrections Foundation Board of Directors in June 2012 by then-Secretary Ken Tucker.

In 2022, he was appointed as President of the Corrections Foundation by Secretary Ricky Dixon.

Vice President of the Corrections Foundation

Mr. Rush has served on the Foundation Board since 2000 and has been reappointed subsequently. He has served as Vice President for consecutive terms since 2004.

Mr. Mecusker is retired from the Department of Corrections with more than 36 years with various positions from Tower Officer, Correctional Officer, Business Manager, Chief of Administrative Services, and Chief of Internal Audit. He retired as the Assistant Warden at Lawtey Correctional Institution.

Mr. Mecusker obtained his first Bachelor of Science Degree in Education (with a major in Mathematics) from the University of Florida in 1973. His second Bachelor of Business Administration Degree (with a Major in Accounting) was earned from the University of North Florida in 1977. He has worked through Lake City Community College as a GED Instructor at RMC and as an Accounting Instructor at Cross City, Florida. He also operates a small consulting/federal tax preparation office in Lake Butler, Florida.

Finance Committee Chair
Co-owner and Chairman of the Board
Allstate Electrical Contractors, Inc.

Mr. Williams served on the Governor’s Ex-Offender Task Force for Re-entry in 2006. He has promoted re-entry and its importance to our state legislature helping to reinforce that it is critical for ex-offenders to be connected to positive and productive activities in their community and that re-entry must be seen as a part of our public safety mission.

Mr. Williams received the Department of Corrections Volunteer of the Year Award in both 1997 and 2005. He has served on the Board of Directors of the Corrections Foundation since 1997 helping to increase membership from 500 in 1998 to more than 14,000 today. He believes in supporting our corrections officers and staff and strives to promote correctional officers and probation officers as proud and indispensable law enforcement vital in protecting our public safety and we are very fortunate to have him serve on our board.

Lisa served as Deputy Chief Financial Officer and Chief of Staff for the Florida Department of Financial Services, a $500 million agency with over 2800 employees and oversight of 13 divisions including Florida’s $20 billion treasury and 400,000 insurance agents. She also was the leader of the My Safe Florida Home program, a $250 million initiative established by the 2006 legislature, to encourage Floridians to strengthen their homes against hurricanes.

Prior to her work with the Department of Financial Services, Lisa served as Deputy Commissioner and chief lobbyist for the Florida Office of Insurance Regulation during 2004 and 2005. Lisa was also responsible for attracting and retaining major investors for the insurance marketplace and managed industry relationships for Florida’s over 1400 insurance companies. Prior to that, she worked as Director of Corporate Relations for an Ernst & Young municipal bond investor relations affiliate. Additionally, she spent 4 years with the Department of Revenue and in the mid-90's served as the Executive Director of the American Society of Notaries where she increased that organization’s membership from 12,000 to 20,000-plus and the budget from $200,000 to $1 million in less than five years.

Lisa has served on numerous panels and commissions including the Governor’s Property Insurance Reform Committee, and the Medical Malpractice Professional Claims Liability Reporting System Task Force. She was the Office of Insurance Regulation’s Board liaison to many quasi-governmental entities including Citizens Property Insurance Corporation, The Florida Automobile Joint Underwriting Association, The Medical Malpractice Joint Underwriting Association, the Workers Compensation Insurance Guaranty Association, and the Florida Insurance Guaranty Association. She was responsible for leading policy initiatives for the various insurance market sectors and she frequently contributed and presented at trade association meetings, corporate symposiums, and insurance industry conferences on the state of the Florida insurance market and legislative and regulatory trends.

Mrs. Nimer was directly responsible for planning, implementing, organizing, and directing operational activities for pre-trial intervention, probation, prison release, community control, and interstate compact activities, for all felony offenders under the department’s supervision.  Prior to being promoted to this position, she held the Deputy Assistant Secretary of Community Corrections.

Mrs. Nimer has 33 years of experience with the Florida Department of Corrections and prior to accepting her current and previous position with the Department, she was the Assistant Bureau Chief for the Bureau of Probation and Parole Field Services.  Mrs. Nimer has held several positions within the department including Deputy Circuit Administrator for judicial circuit two in which she was responsible for overseeing 90 probation and parole officers and staff, monitoring workloads, quality assurance, and implementing Department policy and procedures.  Mrs. Nimer has also worked in the Department’s Bureau of Research and Data Analysis where she was the manager of the community supervision section and was responsible for preparing legislative impact analyses, preparing reports, and various other types of information for the Bureau of Probation and Parole Field Services, and preparing reports, briefing packages, and summary materials to the Florida Legislature and the Governor’s office.

Mrs. Nimer holds a bachelor’s degree in Criminology from Florida State University and has been certified as a correctional probation officer with the state of Florida. 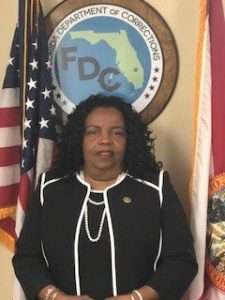 Mrs. Patterson holds several certifications to include:  Correctional Probation Officer, Florida Department of Law Enforcement Certified Instructor, 2008 graduate of the Correctional Leadership Development Class of the National Institute of Corrections (NIC), Colorado, Thinking for a Change (T4C) facilitator, Level of Service Inventory-Revised (LSI-R) Facilitator, and an Ohio Risk Assessment System (ORAS) Facilitator.  She is one of the “First Fifty” ACA certified as a Correctional Behavioral Health Professional for FDC in 2016.  2016 graduate of the Florida Department of Law Enforcement (FDLE) Executive Leadership Academy in Tallahassee.

Mr. Riedl earned a Bachelor of Science in Criminal Justice/Corrections from Simpson College in Indianola, IA.

Mr. Riedl is very active in community partnerships and has received various awards and recognitions for this service. Mr. Riedl is also active in other professional affiliations including currently serving as Commissioner for the Criminal Justice Standards and Training Commission, previously serving as Chairperson for the Central Florida Criminal Justice Advisory Committee as well as President and Vice President for Florida Council on Crime and Delinquency.

Mr. Wynns graduated from Florida State University with a degree in Criminology and began working for the Department of Corrections in 1986 and has served over 34 years in Community Corrections. He began his career as a Probation officer and continuously rose through the ranks to obtain his current position in 2014 as Assistant Regional Director of the Northern Region and later realigned to Region III Community Corrections, where he served until retirement.

Mr. Wynns is a former recipient of the Prudential Productivity award in 2016 representing the Department of Corrections for a significant cost avoidance to the State of Florida by arranging and conducting numerous Basic Recruit Academies for the training and certification of Correctional Probation Officers preventing outsourcing and is most proud of being instrumental in initiating in 2007 fundraising Golf Tournament for Special Olympic athletes of Polk County, which continues today. He was appointed to the Corrections Foundation Board of Directors in April 2016 by former Secretary Julie Jones.